While the media is buzzing with the health, social and economic crisis following the worldwide pandemic, COVID-19, we cannot help but look at the reactions from the tech giants like Apple and Samsung. These companies have already been responding to the massive health crisis outbreak by limiting travel, cancelling major events and avoiding misinformation on their communication platforms. Although there have been official communications from both manufacturers in terms of the production, products’ launches and important news, there have also been … some rumors.

Let’s take a look at the release dates’ updates as well as at the news on the famous launches from both Apple and Samsung.

As representatives of Apple write in the letter dedicated to the “Apple Family”, they believe that technology can change lives especially in such a devastating moment. They also express their solidarity by donating to help treat those who are sick and help lessen the economic and community impacts of the pandemic COVID-19. This response reaches up to USD 15 million worldwide. The main retail stores and factories in China were closed until March 27th in order to prevent further spread of the virus, slowing therefore the production of the appliances and postponing launch dates.

So, considering the situation, what has been boiling in terms of the products’ launches and release dates?! 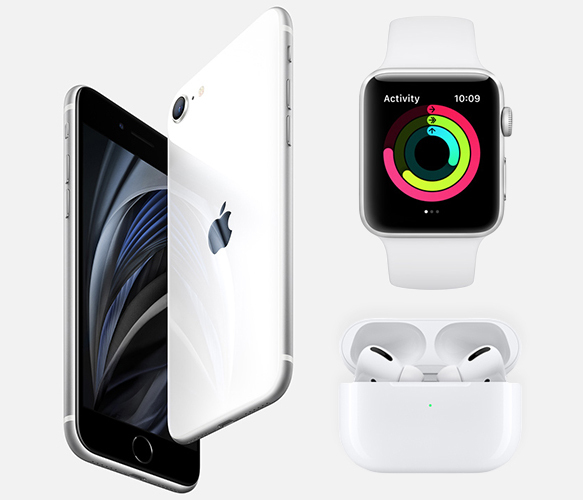 In March 2020 Apple communicated that iPhone 9 (or iPhone SE 2) would enter the mass production. This smaller budget device was initially projected to be launched in late March, but Apple struggled with production delays related to the outbreak.

On April 15th Apple introduced the 400 dollars iPhone SE, the so known as “affordable, without compromises”. This phone is put in iPhone 8 skin but represents the courage of iPhone 11. iPhone SE has the same A13 Bionic processor as iPhone 11, the fastest you can get.

Last October Apple expanded its in-ear headphones range. The AirPods were alternated with AirPods Pro introducing a new design. The new AirPods were to be launched in Apple’s March event alongside the MacBook Pro, but it is now said that they will be launched next month.

And this is not the only good news. The over-ear headphones are expected to invade the markets soon and it is already clear that they will become the new must-have. The real competitor of The Beats is believed to be launched perhaps as soon as WWDC event in June.

Have you heard about the new Apple Watch series?! Well, to begin with, this new series will introduce an immense health upgrade. If you already have an Apple Watch, you’ll know that it already offers a range of neat health features, like telling the heart rate, encouraging exercising and recording an ECG measurement and sport atrial Fibrillation (AFib).

Rumors have it that the new apple watch will be about the mental health and the watches will be equipped with a panic attacks’ tracking feature. Its function is to tell when the wearer feels more stressed and record a history of detected panic attacks. The hope is to be able to predict when the wearers are about to go through a panic attack and prevent it therefore with the help of the app Breathe. The launch date remains the second week of September if everything will go well.

WWDC, one of the most important events organized by Apple every June, will still be held through online streaming. Although, the date hasn’t been fixed just yet. WWDC this year will offer a new format that delivers a full program with an online keynote and sessions, offering a great learning experience for the developer community.

While strongly promoting the rights of their employees and the efforts to make sure they are healthy and provide them with help all around the world, Samsung has officially shared with everyone the precautions to prevent the further spread of the pandemic in its critical workplaces. Samsung is offering the online support for its customers as well as contractual facilities for every service that has not been provided in time. Samsung has donated USD 29 million worth of funds and goods to governments and communities that have most been affected by Covid-19.

It was first projected to be launched by February 2020 during the Galaxy S20 launch event, but there was no action made in this direction last month. This brings us to believe that most probably the new watch will be launched around the end of 2020 coinciding with the release of Apple Watch 6.

Although, this delay doesn’t seem to be a coincidence. The Samsung Galaxy Watch launched in late 2018 and before that the Samsung Gear S3 came out in late 2016. So, this means that the company employs a two-year cycle with its smartwatches, releasing them at the end of the year, away from its Unpacked event and towards the Galaxy Note release. The expectation is for the Samsung Galaxy Watch 2 to lead the competition between top-end wearables.

Samsung launched the Galaxy Z Flip foldable alongside the Galaxy S20 series earlier this year. It is currently available in an LTE model, but Samsung plans to release a 5G version of it sometimes later this year.

Samsung’s Galaxy S20 launched at the end of February 2020, just giving us a small glimpse on what else to expect this year. The next big launch from Samsung is expected to be Galaxy Note 20 which in the past has improved on the Galaxy S range in certain areas like the design and the camera. Considering what happened for the first time with Note 10 and the Note 10+, it is expected that this year there will be the launches of Samsung note 20 and Samsung Note 20+. The release period is expected to be August 2020.

Apple and Goldman Sachs are working together to create an Apple Credit Card, made to work with the Wallet App in iPhones and Apple watches. The card will be released later this year, according to the …

As the Covid-19 is taking over the biggest part of the world, the most effective precaution we can all take this far is to stay home and safe, therefore helping altogether in minimizing the spread of …

Apple WWDC 19 it’s finally started: an entire week for all developers worldwide to learn more about the new software updates Apple will release this fall. We have already shared with you some rumors a…